In the world of a 15 month old baby, everything is interesting. And they’re not satisfied with window shopping. Looking has to be accompanied by touching and tasting—just to be sure that said item is indeed as fascinating as it appears. No 15 month old baby can be too certain. 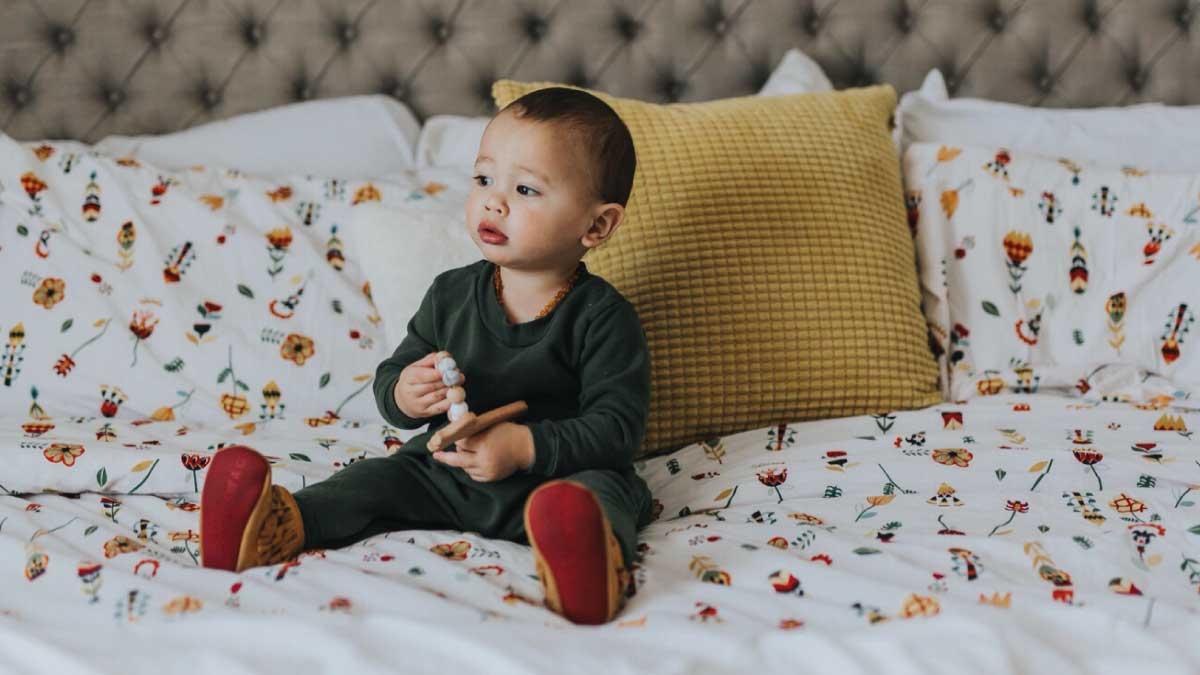 And not only are they down with the detective work, those tantrumy twos are on the horizon, and they’re starting to rehearse for their starring role.

But it’s not all detectives and divas. This period is filled with all sorts of wonders (and challenges) as you get to know your baby better and better every day.

So what are the milestones for a 15 month old? Let’s take a look at what you might expect.

Babies are all magnificently different. Factors such as being born premature, for example, affect the speed of a baby’s development. So rather than thinking of this as some sort of 15 month old development checklist, see it as the roughest of guidelines. (Read: don’t freak out if you think your baby is behind in some way—but do check in with your doc if you’re at all worried.)

What should my 15 month old be doing?

While there are no shoulds here, these are some things you might expect:

How many words should my 15 month old say?

Here’s the average number: 2 to 5. But seriously. This is only an average. There are outliers on either side of the spectrum. If you’re at all worried, check in with your doc.

Some favorite words? Mama, Dada, Baba, Nana, Doggie. It can be more than a little enchanting watching your baby discover their language.

They might also have a whole repertoire of gibberish syllables that they like to string together into something that sounds a lot like a news broadcast. Or a fairytale. Or a ghost story.

And not all language is verbal. They may be mastering the art of the point, both as a means of identifying body parts (Where’s your nose?) and as a means of ordering you around to get what they want. As you may have experienced, they might be more than a little upset if they don’t get the items they’re after. While this can be incredibly challenging, it’s normal. They’re learning (rather dramatically) how to get what they want in life. (Mine! Mine! Mine!)

Oh, a quick heads up: rather than asking, What words should baby say at 15 months? ask what words they shouldn’t be saying. Remember how good they’re getting at playing copycat? (C’mon. What mama hasn’t dropped an expletive while an item nosedives to the floor during a magical display of multitasking?)

How much should a 15 month old weigh? Somewhere between 21.2 and 22.7 pounds, according to the WHO. That’s about double the weight of a small cat. No wonder your arms are tired.

Your 15 month old baby is likely on a similar eating schedule to you: three meals and two snacks a day, all amounting to about 1000 calories.

Pick from all food types and colors: fruit, vegetables, grains, meat or vegetarian proteins, and yogurt.

Major bonus: they can pick up finger food and put it in their mouth. What a hit they would make at a cocktail party.

They may be getting better at eating. Sleeping? Perhaps not as much.

Sleep regression usually lasts about 2 to 4 weeks and coincides with big milestones (such as learning to walk) and growth spurts. While not too typical at exactly 15 months, there’s a chance that your baby could experience sleep regression at this juncture.

Sleep regression is essentially baby nightmares—and, at this young age, they can’t tell the difference between nightmares and reality. Frightening, for sure. This might cause your little one to wake up multiple times or be more fussy at bedtime, and can even cause changes in appetite.

What can you do to make sleep issues all a little easier for them? Regular sleep schedules and a bedtime routine do wonders, but are not always possible. Do what you can.

It’s also a good idea to spend a bit of extra time settling them before bedtime. Go into wind down mode a while before sleep-time by cutting out the more stimulating activities. Then, of course, hop into full mama reassurance mode if they have a meltdown.

You and your 15 month old baby

You might be all sorts of exhausted right now. Sleep challenges may be leaving you spent. The other thing that we don’t talk about nearly enough is how isolating having a 15 month old baby can be. Whether you’re at home or back at work, the experience can be pretty solitary.

So, while it’s easier said than done, this is as good a time as any to reach out to your support network. The mamas of Peanut will always have your back.