Parenting can be a tough job. It’s filled with pleasures and joys and overwhelming moments of pride, that’s for sure. However, there’s always that little niggling thought that the ways we bring up our kids – what we call our parenting styles – can affect them for the rest of their lives.

Great! So, what are they? And which one is the best? Here we’ve got the answers.

What are the 4 types of parenting styles?

Hang on, didn’t you say 6? Yep! The thing is, usually, when people talk about different types of parenting, they have 4 parenting styles in mind. These 4 are the most common and the most well-established in science.

That’s all thanks to a certain Diana Baumrind, the clinical psychologist who came up with the notion of parenting styles. She gave her name to what became known as the Baumrind parenting styles.

Baumrind identified these styles in studies she performed in the 1960s. She looked at lots of different things that parents do – such as, how they discipline their kids, how they show warmth and affection, how they communicate with their kids generally, and the amount of independence or supervision they give.

Ultimately, she classified them on two scales:

All 4 Baumrind parenting styles can be put on a grid, like this one: 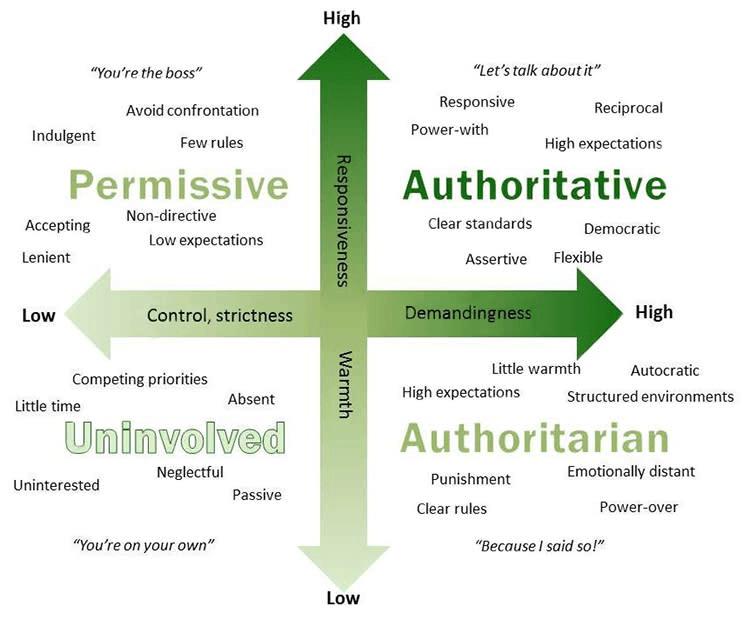 Let’s look at them more in detail. In reality, you might not sit in any one style exactly. Instead, you may well float somewhere within the grid.

In this way, authoritarian parents are very demanding but not very responsive to the kid’s needs. The result can be a parenting style built on punishment rather than explanation or understanding.

Sometimes, this approach has its place. However, the risk is that kids end up with a limited ability to solve problems or make choices for themselves.

Let’s say the permissive parenting style is the opposite of the authoritarian. Rules are not set or they are very lenient. If you’re a permissive parent, it can mean that you are very responsive (in that you let your kids do what they want), but not very demanding.

In many ways, this is great. But it can mean that your kids grow up without a healthy respect for authority. Studies suggest they tend (although it’s far from always) to perform less well at school too.

Uninvolved parenting is not an original Baumrind parenting style. It was added to her findings by two scientists a little later on.

This parenting style is characterized by low demandingness and low responsiveness. Meaning, you provide everything to keep your kids alive and well, but you are distant. You don’t supply the affection, warmth, and hands-on guidance that other styles do.

Without that emotional and physical presence, kids can develop issues with self-esteem or in building fulfilling relationships.

If you’re wondering what is the best parenting style? Here’s what many people would say is the answer: authoritative parenting. It’s thought to offer the right balance between high demandingness and high responsiveness.

You’ll set rules alongside your kid’s input, helping them to understand why that rule might be important (not just because you said so!). And, when they don’t follow the rules, you don’t punish, but give feedback and support them to improve.

Sounds great. In the meantime, you show them lots of warmth and understanding as well. Win–win!

Yep, we said 6! While the Baumrind parenting styles tend to be the most well-known, scientists since the 60s have come up with different approaches to parenting that are worth knowing. As a result, these aren’t built around that demandingness/responsiveness thing.

Instead, they’re a little more intentional. The two main ones to know are attachment parenting and so-called free-range parenting.

Of course, attachment parenting by the book is not the only way to build that healthy emotional connection. However, the psychologists that encourage this style developed 8 principles that can help parents achieve this:

This one is less a general parenting style and more a particular guide to parenting. Most of these principles may already feel second nature to you. However, if you ever feel a bit unsure of yourself as a parent, they can be a good reminder of what you might aim for.

Don’t think of chickens clucking in the farmyard. Or maybe do! Free-range parenting is the name for a parenting style that deliberately encourages independence and autonomy in children. How? By reducing supervision.

It all came about when the writer and mama Lenore Skenazy let her 9-year-old take the New York subway home by himself (eek!). While she faced a lot of criticism, this was not simply permissive parenting on steroids.

Rather, free-range parenting is ideally much more intentional and trusting. It lets kids discover the rules and limits to their behavior themselves while promoting individual problem-solving, creativity, and self-sufficiency in their own way. And, at the same time, you’ll need to give them all the support, sensitivity, and responsiveness they need too.

Maybe it’d work for you!

Now you know some of the main parenting styles, which is most like you? In all likelihood, you’re not completely authoritarian, or utterly permissive. You might find yourself somewhere in between.

We’ll say again, wherever you fit into these styles, it doesn’t mean that you’re doing this whole parenting thing wrong! We trust you’re doing great. But being conscious of the sort of mama you are might help you see how you can develop your parenting style in the long run. And that can only be a good thing.