Baby Teething at Three Months? What to Know

We say it a lot, we know, but all babies are different. Although most babies get their first tooth sometime around six months, those first teeth can also appear a lot earlier. (And some babies can be born with teeth too.) 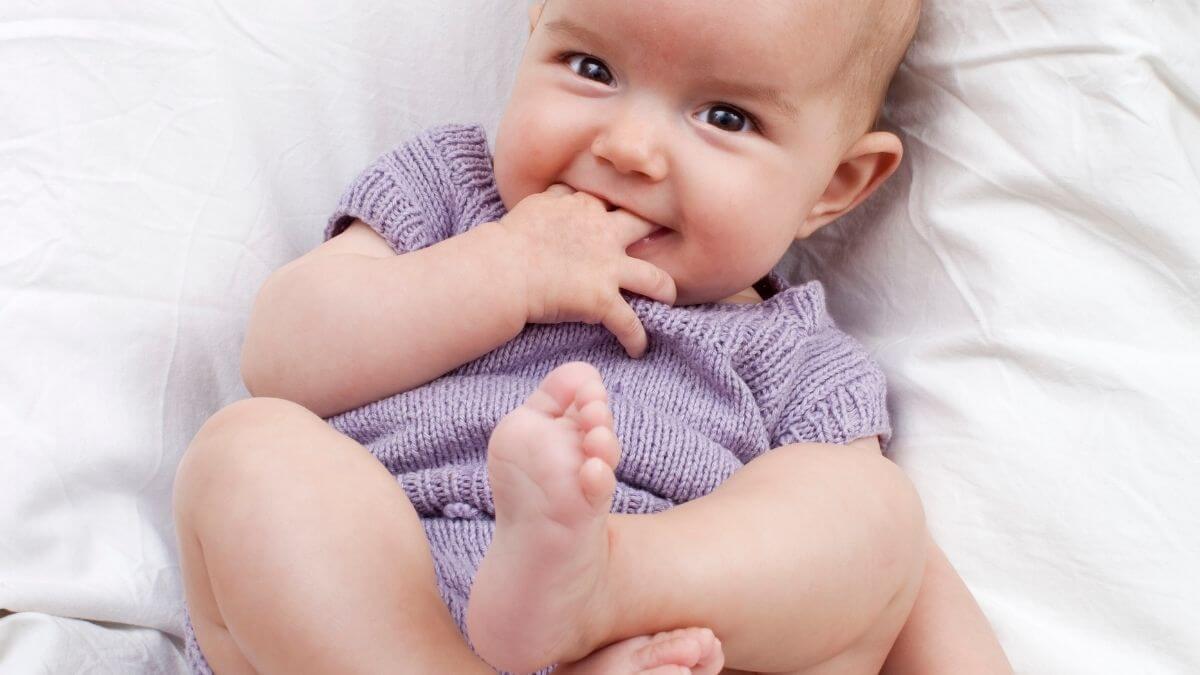 Here’s how to know if your baby is teething at three months, how to help them through it, and how long you can expect to be dealing with the dreaded symptoms of teething.

When do babies start teething?

In general, babies get their first tooth between the ages of four and seven months. They usually get their two front teeth on the bottom first, followed by the top ones. They then come one at a time, or in pairs all the way back to their molars.

You can find a teething chart to help you understand the process here.

All their teeth should have appeared by the time they’re three. Scientists are still not sure if it’s a good or a bad thing if it’s done before then. On the plus side, it’s over faster. But all that teething fun squeezed into just one year? Maybe we’d all rather have a break (and catch up on some sleep) in between.

But can babies start teething as early as three months?

Well, they do like to surprise us, don’t they? Getting their first teeth earlier than four months is unusual, but it’s nothing to worry about.

A note on toothbrushing

You might never have imagined brushing your baby’s teeth before they can even sit up on their own, but if they’ve got a tooth, it’s time to start. Before six months, it’s best to just lightly brush their tooth with a soft brush twice a day. You might find it easier to use a toothbrush that pops onto your finger (and it might even help their teething pain).

Stick to brushing with water at this point. There’s plenty of time for toothpaste once they’ve hit their half birthday.

How do I know if my 3 month old is teething?

The classic signs of teething are:

You might notice your peanut trying to chew things to relieve the pressure under their gums, or putting their hands in their mouths because it hurts. They might even pull on their ears because teething can make their whole head feel really strange.

But the problem when your baby teeths very early is that it’s harder to tell that they’re definitely teething.

They might not be coordinated enough to put a teether in their mouth. They might be having trouble sleeping because they’ve hit the dreaded four-month sleep regression. And some babies do just start to drool more (and even develop what looks like a teething rash on their chin) at this age.

You might not know for sure until you see the tooth itself.

Here are some more unexpected teething symptoms that could help:

If your little one is going through the last two things on this list, watch out for signs of dehydration, including dry, sunken eyes, dry mouth, and no wet diapers for six to eight hours or more.

If only they could tell us exactly what was wrong, right?

Some parents see their baby spike a very mild (under 100.4) temperature for a few hours when they’re teething. The jury’s still out on whether this is really a teething symptom.

You should be extra cautious if your baby is as young as three months and has any kind of fever at all. It’s worth giving your doctor a call before you try anything to get their temperature down at home because, at this age, an infection can make them pretty sick pretty quickly.

What can I give my 3 month old for teething?

So what to do for a teething baby at three months?

Sadly, some of the classic teething remedies for older babies are off the menu when they’re this young. They’re not ready for solids, so you can’t give them any cold foods. It’s also best to be cautious with painkillers at this age, especially if your baby had a low birth weight. And homeopathic teething gels aren’t really recommended for any babies, especially the youngest ones.

You’ll probably be able to help them the most by washing your hands and rubbing their gums with your finger to relieve some of the pressure they’re feeling. Another great tip is teething mittens, which they can happily chew for hours even where they’d struggle to hold a teething ring for long.

We’ve put some suggestions on teething remedies here, but again, consult your doctor before giving any medicines to a baby as young as three months.

How long does teething last in a 3 month old?

Again, there’s no definitive answer. It lasts as long as it lasts.

If they’re only cutting one or two teeth, the symptoms might start a week or two before the teeth appear. You might be able to see the tooth under the gum about two days before it comes through. And then your baby will have almost instant relief (and a very cute new smile) as soon as the tooth emerges.

But if you’re reading this in the middle of the night, wondering if teeth are the reason that everyone is still awake, we’ve got a ton of info about teething that could also help:

How long does teething last?
When do babies start teething
How to soothe a teething baby at night
Six toys for a 3-month old (spoiler alert – lots of them are chewable).

And did we mention that the Peanut Community is always there if you’re starting to feel like it will never end?