Ah, ceviche. This amazingly tasty, citrusy seafood dish is a treat alright, but is it one to enjoy while you’re growing a tiny human? Can pregnant women eat ceviche? Unfortunately, this one definitely lands in the “no” pile. 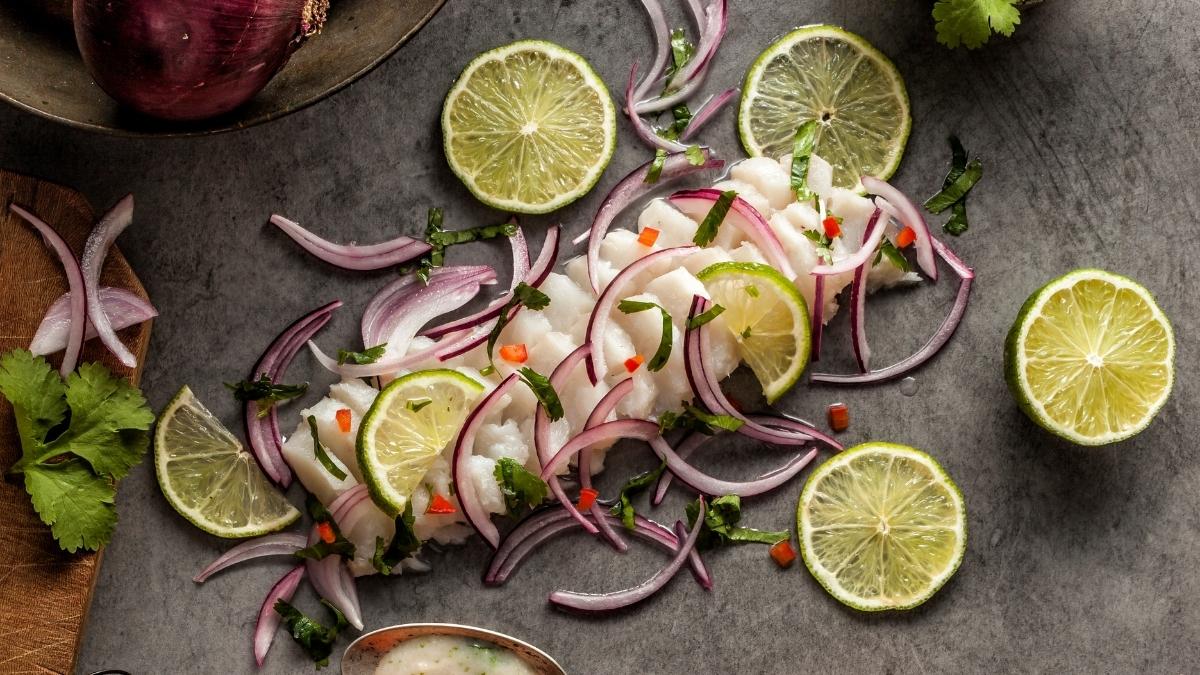 Ceviche originates from Peru and is a commonly enjoyed dish in many Latin American countries, where some people eat it every day.

But that doesn’t mean it’s safe for pregnant people.

Ceviche during pregnancy is listed by pretty much all doctors as definitely one to avoid while pregnant.

But why? What’s the big fuss with ceviche?

Here’s a round-up of what you need to know about this tasty seafood dish.

No, it’s not cooked in the traditional sense using heat, and this is where the problem lies.

Uncooked fish is a common feature on the foods to avoid while pregnant lists, and ceviche is no different.

But it looks cooked, so what’s the problem? Let’s get technical….

Can I eat shrimp cooked in lime while pregnant?

So, ceviche is raw fish or shellfish “cooked” in citric acid (lime or lemon juice), which changes the structure of the proteins within the meat.

The problem is that “cooking” in citrus juice only affects the surface of the fish, not the flesh within, and doesn’t have the bacteria-killing power of heat.

Common parasites like worms live deep in the flesh of fish, and some bacteria like salmonella are resistant to citric acid, so cooking in lime juice won’t get rid of them.

What are the risks of eating ceviche while pregnant?

If you’re still wondering can you eat ceviche while pregnant?, it may help to know some of the associated risks so you can make your own decision.

Generally speaking, the risks of eating ceviche come down to the presence of nasty parasites and bacteria, like listeria and salmonella, found in raw fish.

Also, pregnant women are at a much higher risk of contracting food poisoning than the general population, thanks to that lowered immune system.

Listeriosis, the illness caused by the bacteria listeria, can present as late as two months after eating infected food and can cause:

It can put you at risk of dehydration, and even premature birth, stillbirth, or miscarriage.

If the bacteria is passed to your unborn child, it can cause lifelong brain, heart, and kidney function issues, even blindness or paralysis.

Not to completely freak you out, but listeriosis is definitely something to avoid.

So now that we know the answer to “is ceviche safe during pregnancy?”, you might be looking for the next best thing to satisfy your seafood cravings.

So what about a shrimp cocktail? If the shrimp is cooked, then, by all means, dig in.

Is it safe to eat ceviche?

So, no, it’s not safe to eat ceviche while pregnant.

Even if you make it yourself or buy the fish from a trusted source, it really is best to avoid.

The good news is, once baby is born, you can go back to eating ceviche to your heart’s content!