Chickenpox in Infants: What You Need to Know

Chickenpox in infants: the bane of many a baby’s (and mama’s) life. When your little one is covered with hundreds of itchy red bumps, fun is well and truly off the table. 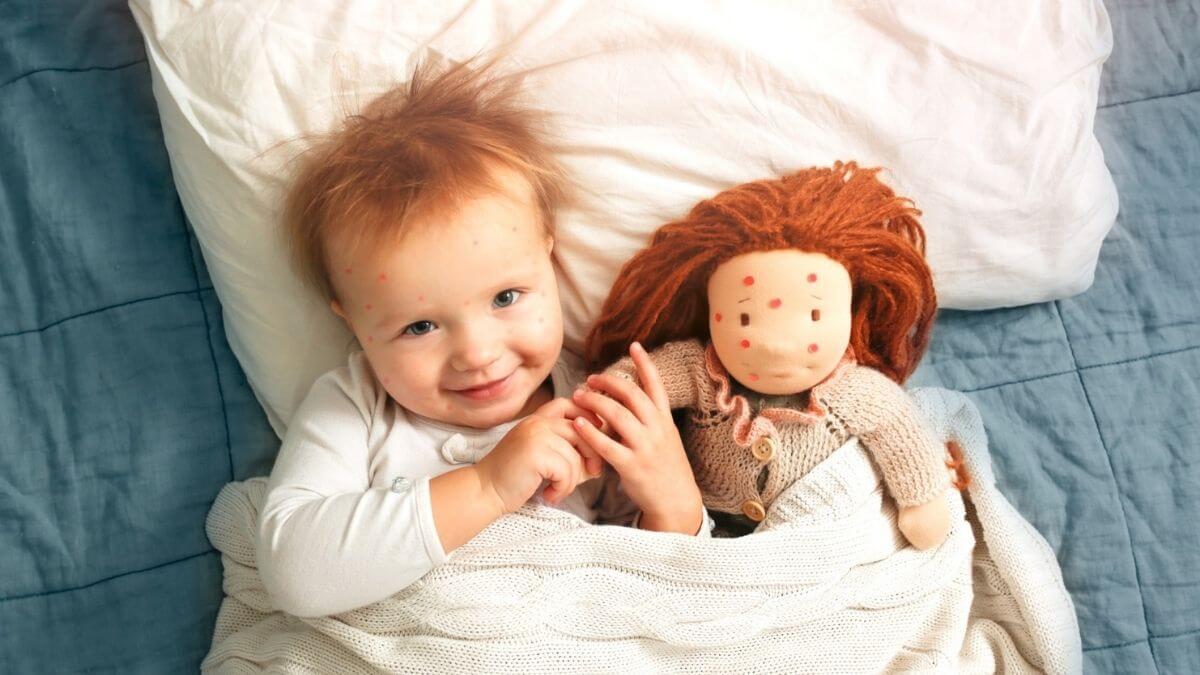 The good news, however, is this super-infectious viral illness just isn’t as common as it used to be. In the US, chickenpox case numbers have plummeted since the launch of a vaccine in 1995.

And if your baby does get chickenpox, they’ll likely be all better in a few short days. But it’s still best to seek your pediatrician’s advice — for younger babies, chickenpox can sometimes be more serious.

In this article, we take a look at symptoms, treatments, and all your FAQs about infant chickenpox.

What causes chickenpox in infants?

Chickenpox is passed on through a virus called varicella-zoster. So your baby could catch it if they have contact with another baby, kid, or adult with chickenpox. That might be through touching the person’s saliva, mucus, or blisters (the itchy red spots). The virus can also travel through the air via coughs or sneezes.

Babies can’t be vaccinated against chickenpox until they’re one year old. But the good news is, they’re still protected by “herd immunity”. In other words, if a lot of people around them have had the vaccine (or are immune, because they’ve already had the illness), they’re less likely to catch chickenpox.

If your baby is a newborn or has a weakened immune system (where their body can’t fight off illness so well), it’s important to keep them away from someone infected with chickenpox. That’s because the illness could affect them more severely.

Symptoms of chickenpox in infants

About one to two days before the distinctive rash appears, there are some early signs of chickenpox in infants that you might spot:

The chickenpox rash will generally show up on your baby’s chest, scalp, and face first. Then it spreads to the rest of their body. You could see up to 500 itchy red bumps — but it might be a lot less if it’s just a mild case. Babies who already have a skin condition, like eczema, can get a more severe rash.

The rash actually comes in waves over two to four days. Here’s what happens:

Because there are usually several waves of the rash, you could see all these different phases on your baby’s body at once — spots, blisters, and scabs.

But don’t worry: in most cases the rash will heal up nicely, leaving no scars.

Chickenpox symptoms in babies can last for five to 10 days. And it’s important to keep your little one at home until they’re no longer infectious. That’s about 10 days after the first symptoms appeared, once the scabs have dried up.

Is it safe for a baby to get chickenpox?

Chickenpox is usually a mild illness. While your poor baby might be uncomfortable for a few days, they won’t usually have severe symptoms. And most kids will become immune to the infection once they’ve had it.

That said, you should let your pediatrician know if you suspect chickenpox, even if it seems mild. And tell them if you see any of the following symptoms (which could suggest a more serious illness):

Also, it’s best to check in with your doctor if:

In rare cases, chickenpox can lead to complications (that is, other medical issues). This may be more likely if your baby doesn’t have what’s called “passive immunity”. That’s where they pick up some resistance to chickenpox through you if you had chickenpox — or the chickenpox vaccine — before your pregnancy.

Without passive immunity, babies with chickenpox have a higher risk of developing:

So if you haven’t had chickenpox or the chickenpox vaccine yourself, and your baby catches the illness, it’s important to seek medical advice as soon as you can.

What is the treatment for chickenpox in babies?

Chickenpox usually gets better on its own in five to 10 days. Until it does, here are a few things you can do to make your baby more comfortable:

Important: Never give a baby (or a child under 18 years old) aspirin when they have chickenpox. This can lead to a serious illness called Reye’s syndrome.

Other treatments for chickenpox

Babies with chickenpox can sometimes get a bacterial infection around their blisters if they scratch them too much. Your doctor might prescribe a course of antibiotics to help clear this up.

If your baby is at risk of complications from chickenpox (see above), they might get an antiviral medication to help make their symptoms less severe.

Let’s finish with a few of your FAQs about infant chickenpox: