Ovulation Bleeding: What You Need to Know

If you see a tiny bit of blood in your underwear around about the middle of your menstrual cycle, the culprit could be ovulation bleeding. Ovulation is that key moment when your ovary releases an egg, ready to begin its journey towards fertilization – and, hopefully, becoming a baby! 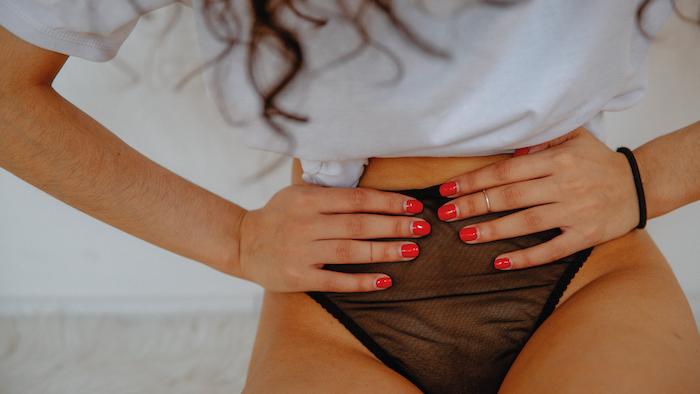 Now, we know it doesn’t seem fair to get extra bleeding (aka spotting) on top of your period, but spotting during ovulation could be an extra handy fertility sign to help you if you’re trying to conceive.

Is bleeding during ovulation normal?

Ovulation bleeding is actually quite rare: it’s estimated that around 5% of women experience it. But if you’re one of those few, don’t worry! A small amount of bleeding when ovulation is occurring isn’t usually a sign that anything is wrong.

What causes spotting during ovulation?

It’s thought that ovulation bleeding could be caused by the swift changes in hormone levels that take place around ovulation, which happens around 11 to 21 days after the first day of your last period (depending on the length of your cycle).

Before the egg is released, estrogen levels have been ramping up to turn your uterus into a cozy home for a baby to grow in. Then, a spike in the hormone LH (luteinizing hormone) causes the egg to pop out of your ovary and start heading down the fallopian tube.

At this point, estrogen levels have begun falling again and the hormone progesterone takes over the job of preparing your uterus to welcome the fertilized egg. It’s thought that this change from estrogen being in control to progesterone taking charge is what might cause spotting after ovulation in some women.

Ovulation spotting usually appears as a small amount of blood, which is reddish, brown, or pink in color. If it’s pink, that’s probably because the blood has mixed with your cervical fluid – something you have more of in the days leading up to ovulation.

How long does ovulation bleeding last?

Ovulation bleeding is likely to last a day or two at most, and, as we saw earlier, the bleeding should only be very light. If you have spotting that isn’t going away, the bleeding is heavier, or you have any other unpleasant symptoms (such as severe abdominal pain, dizziness, or a fever) it would be a good idea to talk to your doctor.

How long after ovulation does implantation bleeding occur? Well, an egg has to be fertilized within 24 hours of its release from the ovary, and then implantation happens 7 to 14 days after the egg is fertilized.

It can be easy to mistake implantation bleeding for the start of your period, but it’s a much lighter flow of blood and only lasts half a day to 2 days. The blood will also look more similar to ovulation bleeding (brown, reddish, or pink) than the bright red blood of your period.

Other signs of ovulation to watch for

If you do regularly experience ovulation bleeding, you could record this and other signs of ovulation to help you maximize your chances of conceiving.

Keep an eye on your cervical fluid, too. When this is very wet and/or stretchy like egg white, it’s a sign that ovulation is on the way. It’s also the start of your “fertile window”: as sperm can survive for several days in this fluid, get busy between the sheets ASAP to increase the odds of getting pregnant once ovulation occurs.

There are a few other signs that you can look out for too:

Essentially, it’s about working out which signs are most noticeable for you and which are most convenient for you to track. Once you’ve got that sorted, you can put the notebook to one side and get on with the fun part of making a baby!

💡 Read next:
Bloating During Ovulation: What it is and how to help
What to Know About Late Ovulation
What Does Ovulation Feel Like?
What Can You Do About Ovulation Cramps?
Ovulation Tests: How They Work & When to Use Them
7 Possible Ovulation Symptoms
Ovulation Pain: Everything You Need to Know