Ovulation Pain: Everything You Need to Know

So, what is ovulation pain, you ask? Well, first up, it might be reassuring to know that painful ovulation is a fairly common condition, with 1 in 5 fertile women experiencing ovulation pain on a regular basis. 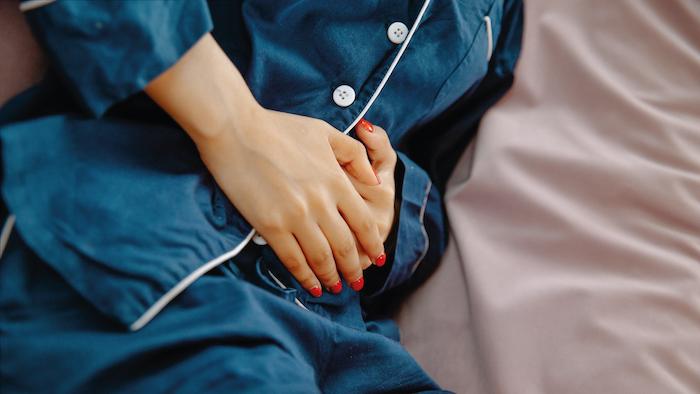 If you’re noticing a weird cramp feeling in the middle of your cycle, this may be it.

Also known as “mittelschmerz”, meaning “middle pain” in German (think ‘middle of the month’), it’s usually nothing to worry about, so relax, there’s no cause for alarm!

Here’s everything you need to know about pain during ovulation.

What happens when you ovulate?

For fertile women, ovulation is the time in your menstrual cycle where an increase in your luteinizing hormone (LH) levels trigger an egg to be released by an enlarged follicle in your ovary.

The egg is released into a fallopian tube, which contracts in waves to help move the egg along towards your uterus.

If you’re trying to conceive (TTC), hopefully, the egg will be met by some super-keen sperm along that fallopian tube, ready to get the baby-making process started.

If not, the unfertilized egg will make its way to the uterus unaccompanied, to be shed as part of your period.

Ovulation pain symptoms are commonly either a sharp stabbing pain, or an achy cramp, felt in the sides of your lower abdomen, where your ovaries are.

Some women can track their ovulation pain from side to side, month by month, indicating that each ovary releases an egg alternately each month, despite research suggesting that many women don’t ovulate from each ovary in sequence.

Others only ever feel ovulation pain on one side, despite ovulating from both ovaries.

For some women, feeling cramping during ovulation is part of every cycle, for others it’s more of an occasional thing.

Just goes to show how unique our reproductive systems can be!

So is ovulation pain a good sign of fertility?

While feeling pain during ovulation every month is an indicator that you are releasing eggs regularly, there are far more factors, other than missed or irregular ovulation, that can cause infertility.

On the flip side, if you don’t ever experience ovulation pain, it doesn’t mean you aren’t ovulating or that you have fertility issues.

If you’re TTC, it’s probably best to use other detection methods to work out your most fertile days for conception, rather than using ovulation pain alone.

All of us are different, so don’t get too concerned over whether you are – or aren’t – experiencing ovulation cramps.

If it’s such a common condition for us women to go through, you’d think that there would be a clear-cut reason why ovulation pain is a thing.

But even after decades of research, the exact cause of cramps during ovulation is still under the microscope.

The most likely causes of feeling pain during ovulation are:

The follicle in your ovary that is home to the egg being released can swell up to 2cm in diameter before ovulation.

The theory is that this swelling triggers tension in the ovary and an inflammatory response resulting in prostaglandins (aka inflammatory compounds) being produced and causing this, oh so pleasant, pain.

When the egg is released, fluid and blood from the ruptured follicle are too, which may irritate the nerves and abdominal cavity which surrounds the ovary.

Sounds a bit scary, but we’re talking about approximately 5ml, or a teaspoon full!

Despite its small quantity, it can take a while for this excess fluid to dissipate and be absorbed, which is why some scientists believe it to be the reason for ovulation pain that lasts a couple of days.

Abnormal scar tissue from previous surgeries in that area of your body, like a C-section or appendix removal, can restrict normal function and movement, and add additional pressure onto the ovary, felt especially during ovulation.

Ovulation usually occurs in the middle of the menstrual cycle, around day 14, although this will vary depending on the length of your cycle.

For some people, ovulation is as regular as clockwork, and ovulation pain can be a telltale sign that it’s that time of the month again.

While it’s unlikely anyone actually knows what the exact moment of ovulation feels like, research has found that ovulation pain often occurs on the same day as LH levels peak - the day before the egg is released.

How long should ovulation pain last?

Although the reasons why you may feel pain during ovulation might not be clear, it’s important to know that it’s usually a pretty mild discomfort that will pass by itself.

Ovulation cramps can be just a couple of twinges that disappear as quickly as they came on, or they can hang around for a day or two.

If ovulation pains are distracting you from your day, you can usually treat them as you would those typical period cramps by getting under a blanket, eating a bar of chocolate, and binge-watching!

If the pain is so severe that these home treatments don’t help, and you’re concerned there’s something else going on, it might be worth a visit to your doctor.

Severe abdominal pain that fits the description of ovulation pain may be a sign of something else.

An ectopic pregnancy, appendicitis, and Pelvic Inflammatory Disease (PID) can all cause sharp pains and cramps in the side of your lower abdomen, while conditions like Endometriosis and ovarian cysts, can make severe ovulation pain more likely.

Ovulation cramps can be a helpful guide to where you are in your cycle, or just yet another great symptom of being a woman, but either way, they shouldn’t give you real reason for concern.

Remember, you know your body best, so trust your gut – literally – and seek medical advice if you think you need it.

💡You might like:
Ovulation Bleeding: What You Need to Know
Bloating During Ovulation: What it is and how to help
What to Know About Late Ovulation
What Does Ovulation Feel Like?
What Can You Do About Ovulation Cramps?
Ovulation Tests: How They Work & When to Use Them
7 Possible Ovulation Symptoms
Ovulation Pain: Everything You Need to Know