When Do Babies See Color?

When do babies see color? And what colors do babies see first? They’re common questions for curious mamas. Yet, you just might be barking up the wrong tree. 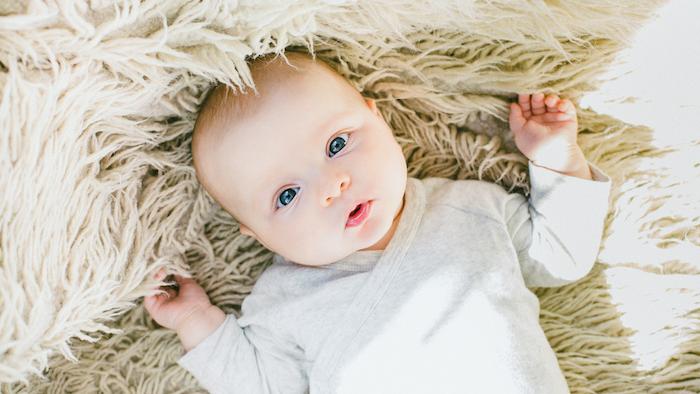 You may have heard that babies start off seeing only in black and white. We’d heard that too. But while babies do have quite limited vision as they begin life (fair enough, they’ve just spent 9 months inside your belly!), it might be that their vision is not quite as bad as we thought.

So, when do babies see color? The reality is: we don’t really know. But here, we’ll try our best to point you in the direction of an answer.

What can babies see?

It makes sense that the world is a little blurry when babies take their first few glimpses of it. While baby eyes develop after just four weeks of a mama’s pregnancy, they remain closed until about 26 weeks. And, even when they do open their eyes, there’s not that much to see.

According to some estimates, a newborn’s visual capacity is 5% of the average adult’s. And that tends to be limited to a distance of about 30cm. So, it’s fair to say eyesight isn’t your baby’s forte.

Conveniently, though, that 30cm is the distance between a mama’s face and her chest. This means you can trust that your little one will be able to see you when you hold them. Clearly, faces are pretty important. From an early age, they are one of the few things that babies can focus on – when they have their eyes open at all.

What can a baby see at 3 months?

Within 3 months, your child will probably be able to recognize faces. After 4 months, they usually start to track movement with their eyes – and see further than before. Meanwhile, at around this time, their eyes will start to work together too, upping their depth perception and distance vision.
And then, amazingly, by about 6 months, your baby’s eyesight is likely to be pretty much as good as yours. We told you things move quickly!

When do babies see color?

Conventionally, they say that newborn babies see exclusively in black and white – with some shades of gray. It’s not until about 4 months that they start to be able to see color. Or so the story goes.

However, recent studies have blurred this common conception of baby vision. According to some research, for example, newborn babies can see large patches of red.

And they may be able to distinguish reds and greens from as early as 8 weeks. However, it is really quite a difficult thing to test.

What these scientists are pretty much agreed on though is that, in the early days, the stronger the color, the more likely that the baby will be able to see it. Meanwhile, this ability develops over time, just like the rest of baby vision.

By 4 to 6 months, scientists reckon, babies will identify colors using the same 5 categories as adults do – namely, red, yellow, green, blue, and purple.

How long do babies see in black and white?

As research is showing, it may not be true that babies see only in black and white at all. Instead, your baby’s vision might be a lot more sophisticated than we thought. Congrats!

If you’re worried that it’s not, though, a doctor will be able to help you out. If your infant doesn’t focus on things – or if their eyes do not seem to work together – this might point to a problem. If it’s still the early days, though, it is usually nothing to worry about. If in doubt, get a checkup!